Chinese Zodiac - Year of the Tiger

While the astrology and horoscopes of the west look at the time of a person's birth in any given year, Chinese astrology places significance on the year itself. The Chinese zodiac is a 60 year cycle, containing five sub-cycles of twelve years, in which each consecutive year has its own animal symbol and horoscope.

Year of the Tiger 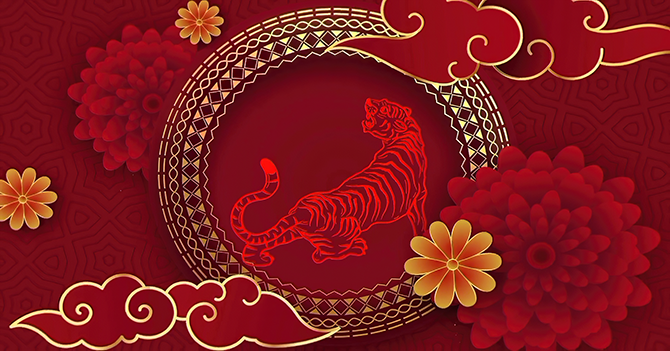 Moving into the Year of the Tiger on 1st February will feel like a fresh start and as you adjust to what will be a fairly sudden shift in focus, this really could start to feel like an opportunity for new beginnings. While every new lunar year brings with it a shift in energy and focus, once every twelve years that shift is a lot more dramatic and that is what we have this year.

Every new lunar year begins on the month of the Tiger and ends on the month of the Ox, two very different energies. The Ox is slow, pedantic, methodical and puts the focus on hard work and on taking responsibility. The Tiger on the other hand loves speed, freedom and wants to run. Where the Ox can focus on ploughing the same field, head down, from sun up to sundown, the Tiger needs to be free to run. You can’t fence in the Tiger and the Ox, built for endurance and hard work feels safe and secure when fenced in.

A lunar month runs for just four weeks but when the month of the Ox ends each year, there is a sense that we have been let out from school, able to embrace the Tiger’s influence just as the Chinese New Year brings a chance for a fresh start. This is what we will have on 1st February but with one very big difference.

What we move into on 1st February is the Year of the Water Tiger, which translates into a year of bold action. Coming out of the austerity of the Ox and especially when for the final four weeks of the Year of the Ox we had a doubling of its influence, this could evoke a call to break free, run for the hills or to break out of any rut you have been in. It is time to escape and start doing something, anything to feel that life is speeding up again. This can lead to impulsiveness but you will find that unwittingly, some of the Ox’s discipline and willpower has rubbed off on you. You might run off and do a few silly or crazy things but then like the Tiger who will sprint after its prey, pull back and take a rest.

Like the animal itself, which has short bursts of extreme activity and then needs to rest, this is a year that will be lived at high speed at times but in intermittent bursts or at least that is the ideal. We needed the Ox’s ability to plod through the things that were required of us in 2021 but in 2022, we will be looking for more freedoms, though knowing when to take responsibility.

The ideal is to find a way to incorporate the two, embracing the Tiger’s need for speed and freedom but realizing that with either the global reality or your individual responsibilities, there are times when the Ox’s ability to stay focused and take responsibility will be a valuable resource.

In saying that, the keyword for a Tiger year is ‘change’. There is going to be change, both on a personal and global level and if we cannot only embrace this chance but to a degree take control and make the choices ourselves rather than let life make them for us, this will be a good and much needed year. A little bit of Ox and a whole lot of Tiger is just what the doctor has prescribed.

The Tiger is all about speed and change and that means that there might be times when you either get impatient that things aren’t moving fast enough or anxious that things are moving too fast. Whether you get the speed wobbles or feel impatient, this is when you can fall back on the Ox’s influence. The Year of the Tiger is also a year where there is a lot more focus on togetherness and can be a year when there are a lot of advances in technology and especially the technology that can bring us closer together.

The Tiger can also foster humanitarianism, where we become more concerned about the welfare of others, either globally or in our community and that includes the environment and the planet itself. Yet at the same time, the Tiger is also all about personal freedom and individuality.

People are often referred to by their zodiac animals, so babies born this year will be Tiger and expected to have personalities to match.

Legend has it that it was originally Buddha who gave the sequence of years to the dozen animals who attended the farewell meeting he called before he left the earth.

In each of its years, the animals of the Chinese zodiac have an association with one of the five elements of metal, water, wood, fire or earth. Once they have all gone through these five elements, the 60 year cycle is complete, and starts again. The elements also affect the individuals born in their years. But their basic personality traits of the animals remain the same. Here is a run down of the twelve zodiac animals and their characteristics.

From all this, you can see that Chinese Zodiac is not a predictive art as it is for western practitioners. Instead it is an art that is interpretive and philosophical. It is perhaps a way to help us understand ourselves, our partners, and all the other people in both our work and social lives.

Western Astrology is very different from Chinese astrology. Chinese Zodiac is arguably the most developed and the most followed branch of astrology in the world. The portion of Chinese astrology that the Western world is most familiar with is the Chinese Horoscopes.